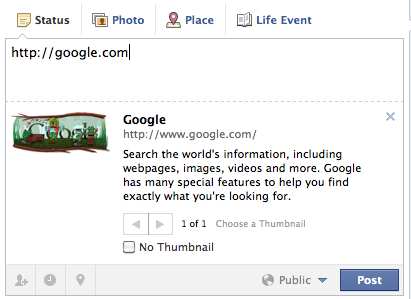 These requests to the google.com server are easily identifiable because the user-agent of the incoming request is an indication of the social networking site being used or the IP address of the incoming request resolves to a particular domain name. For e.g Facebook uses a custom user-agent with the name “facebookexternalhit” and have their IP addresses resolve to tfbnw.net whereas Google+ uses a custom user-agent with the name “Feedfetcher-Google”.

By using some custom php code like “$_SERVER[‘HTTP_USER_AGENT’]” to get the user-agent value and “gethostbyaddr($_SERVER[‘REMOTE_ADDR’])” to resolve the IP address we can easily identify whether the request is coming from a social networking site like Google+ or Facebook or just a regular user.

One of the most important things in order to implement this is to have a domain and an access to a publicly reachable server. We will have a .jpg on our server which will have the php code to identify the user-agent or IP address and display the response accordingly. However in order for the php code to be run in the jpg file, the jpg file must be interpreted as a php file by the server. The following two lines when added in the .htaccess file will serve our purpose. The code has been taken from http://www.blackhatacademy.org/security101/Facebook

Once this is done, we need to have the php code in our .jpg file on the server. The following lines of code demonstrate the exploit code for Facebook, Google+ and Websense. The code has been taken from http://www.blackhatacademy.org/security101/Facebook with the comments and the code a bit modified.

The code is pretty simple to understand. We check the user-agent, and the IP address of the incoming request. If the user-agent is identified as that of either Facebook, Google Plus or Websense then we know that this could be a request to take a snapshot of the url. Hence we display an image present on our server. Note that we also need to modify the Content-Type of the response to make it appear as an image. Hence on the social networking site, say Facebook, the snapshot of the url appears to be an image. However when the user clicks on the url, this time the user-agent is not of Facebook, Google+ or Websense rather it is the user-agent of the user itself. The php code identifies this as a regular user and redirects him to his malicious website (in this case evilsite.com).

Similarly the POC code for Reddit is demonstrated below. This code has been taken from http://www.chokepoint.net/?id=5

Their is also a POC facebook application available at http://www.chokepoint.net/?id=5. It allows us to input an image and a redirect URL. As you can see below, i have given the input image as the image of the Google Logo whereas the redirect url is http://youtube.com. 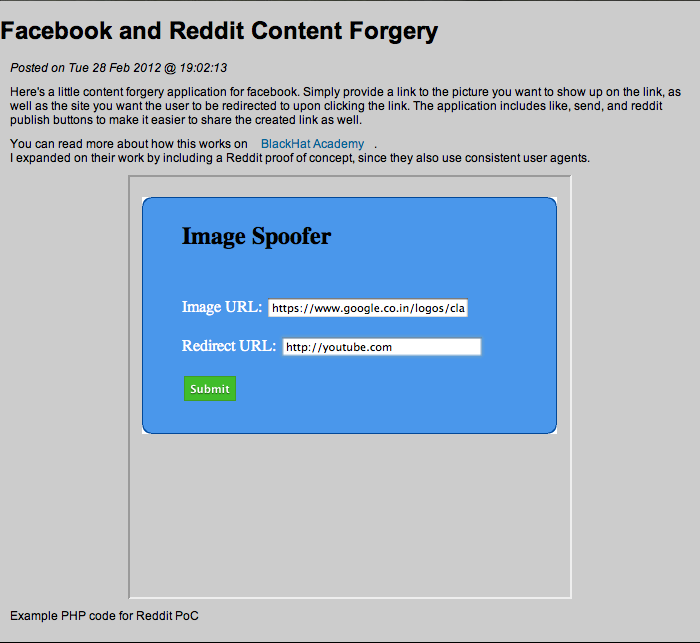 Once this is done, click on Submit. You will see a like button, a send button as well as a Reddit this! button appear. You can now send this request to yourself to check this vulnerability. 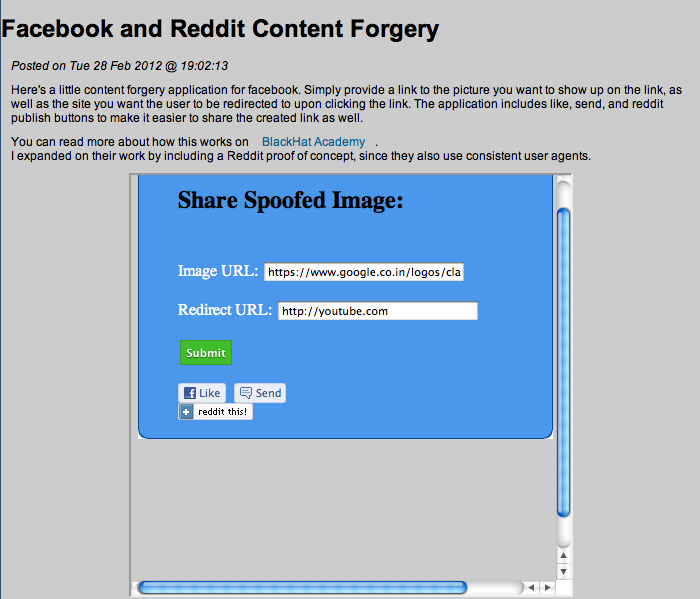 Here is how the sent message looks like. As you can see, the snapshot contains the image of the google URL.

However, when we click on the url, we will be redirected to youtube.com. Try this yourself to see !

In this article we looked at a vulnerability which is caused due to the fact that the request made by Social Networking sites are easilty identifiable. These requests can hence be filtered out from the actual requests by the users. We looked at how this allows us to spoof the content which is actually appearing on the site. This could be used to redirect the users to malicious web pages through these Social networking sites simply because the original snapshot of the url looks pretty simple and unharming.